From Orphan to CHRIST

FROM ORPHAN TO CHRIST

Dad suddenly disappeared when I was 4 years old. He was in the U.S. Navy at the time and quite often gambled away his pay. He must have got into a gambling argument and was killed in a fight and thrown overboard. Nobody knows what really happened. When Mother’s money ran out, we were forced to leave our fairly comfortable home in Maryland and move from one relative to another, or from one dilapidated house to another. One such house was very interesting to us kids, but I know Mother didn’t like it. The house was actually an overpass. We enjoyed seeing the cars and trucks pass under us. This house was condemed by the city and had to be torn down. Wherever I went I had to fight the neighborhood gang boss to see if I could become the new boss. However, I was always afraid to fist-fight and usually came running home with a bloody nose. 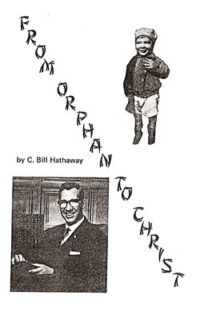 Finally my 2 younger sisters and myself were placed in an orphanage in South Philadelphia. I certainly didn’t like the name of that place. It was called “The Southern Home For Destitute Children.” By this time I was so bad that my Mother couldn’t handle me, so the orphanage was the only answer. Whenever we were caught doing something wrong, we had stiff punishment. At times, because of my meanness, I was forced to stand in the hallway while everyone else slept until one or two a.m., and sometimes, on one foot. But I was clever and devised a spy system to watch out for the workers. Many times I crawled over the barbed wire wall and was gone for one or two hours without being caught. The thing that caused me more punishment than anything else was my terrible street language. I’ll never forget the day I cursed in front of one of the workers. The punishment was horrible. A soft spongy rag was soaked in castor-oil, then poked into my mouth. I was then forced to chew on it for two hours. Every time I moved my mouth, the slimy oil oozed down my throat causing me to choke and almost vomit. But if I did that, then I would have to chew longer, so I just endured it. This horrible treatment just made me rebel and get worse.

Then one night when I was 15, something spectacular happened to me. The orphanage received a phone call from the church across the street. They were having a special meeting and had invited a guest speaker. However, very few of the church members showed up and they were embarrassed because of the empty seats. The idea struck them that if some of the older boys from the orphanage could come just to fill up the seats, the embarrassment would be gone. When asked if we wanted to go I quickly said “yes” because I’d go anywhere just to get away. Then too, it’s always better to say “yes” when you know that they’ll make you go anyway.

Was I ever surprised when I heard the speaker!

What poor English! I doubt that he even completed elementary school. He was just a common Pennsylvania coal miner. His voice was deep and rough, but there was something about him that captured my attention. He spoke as though he cared for me. There was love in his words when he read from the Bible, “FOR GOD SO LOVED THE WORLD, THAT HE GAVE HIS ONLY BEGOTTEN SON, THAT WHOSOEVER BELIEVETH IN HIM SHOULD NOT PERISH, BUT HAVE EVERLASTING LIFE.” But I thought that surely He didn’t die for me because I was just an insignificant mischievous boy. But then he told us that “CHRIST JESUS CAME INTO THE WORLD TO SAVE SINNERS” and I knew that meant me. Then the thought hit me, How could I ever be saved from my wicked life of sin?” The coal miner read from his Bible, “BELIEVE ON THE LORD JESUS CHRIST, AND THOU SHALT BE SAVED.” I wanted salvation. I wanted everlasting life. I wanted happiness more than anything else. I knew then what I must do. Right there, before he was through speaking, I bowed my head and prayed from my heart, “GOD BE MERCIFUL TO ME A SINNER AND SAVE ME FOR CHRIST’S SAKE. AMEN!” I opened my heart and received Jesus Christ as my Saviour. Now I knew I had everlasting life, peace in my heart and true happiness. My life changed that very night. There was no more need for the spy system. No more castor oil rags for me! The things I did before, I didn’t desire to do again. For the first time I had something for which to live. I knew someone cared for me. At last I had a Father who loved me.

Right after my salvation I felt the Lord leading me to become a missionary. At first, I rejected this call. When my Mother came to see us during visiting hours, I told her that the Lord called me to be a minister. This thrilled her because she was a Christian. However, after graduating from high school I joined the U.S. Air Force. When the Korean War broke out, I was shipped overseas to Japan. I didn’t want to go to any foreign country because I knew the Lord wanted me to be a missionary. I definitely didn’t want to meet any rnissionaries, but God had other plans for me. When I met Missionary Ike Foster, he showed me kindness that no other man had shown me before. He treated me like a father. God worked through him in calling me to Japan. On Christmas Eve of 1950 While riding around the city of Nagoya in an army truck with other soldiers singing Christmas carols, I once again felt the Lord speaking to me. God gave me a great love for the Japanese. One day when Bro. Foster gave the invitation in Chiba, Japan I went to the front of the church and surrendered my life as a missionary’to Japan.

You who are reading my story, I would like to say that no matter who you are or what you are, you too, can have this same true peace and happiness and the confidence of eternal life if you will do the following: FIRST, ADMIT THAT YOU ARE A SINNER. Go’d’s Word says, “FOR ALL HAVE SINNED, AND COME SHORT OF THE GLORY OF GOD.” (Rom. 3:23) SECOND, BELIEVE THAT JESUS, GOD’S ONLY SON, PAID YOUR SIN DEBT WHEN HE, DIED IN YOUR PLACE ON THE CROSS. God’s Word says, “FOR THE WAGES OF SIN IS DEATH; BUT THE GIFT OF GOD IS ETERNAL LIFE THROUGH JESUS CHRIST OUR LORD.” (Rom: 6:23) THIRD, ACCEPT HIM NOW AS YOUR SAVIOUR. God’s Word says, “BUT AS MANY AS RECEIVED HIM (JESUS CHRIST), TO THEM GAVE HE POWER TO BECOME THE SONS OF GOD, EVEN TO THEM THAT BELIEVE ON HIS NAME;” (John 1: 12)

If you want this salvation, right now bow your head and pray the prayer I prayed years ago: “GOD, BE MERCIFUL TO ME A SINNER, AND SAVE ME FOR CHRIST’S SAKE. AMEN!” If you’ll do this I can guarantee you that you will be saved. Do it now!

Brother Hathaway served as a missionary in Japan for 25 years.

At 76 he’s still going strong for the Lord. He currently pastors a Japanese church at Baptist Temple in Springfield, MO. He also travels teaching and preaching Faith Promise Missions and the S.O.S. soul winning plan.

His beloved wife went home to be with the Lord February 4, 2005. Brother Hathaway recognized there was a need to minister to surviving spouses and has started Precious Memories Ministry to meet that need.

If you’d like to contact Brother Hathaway send him an email . You can find out more about his ministry at his web site.